As amazing as VR may be, nothing disrupts the immersion quite like sticking your hand right through a wall. While some teams are using haptics to simulate the sense of touch, a new study offers a clever alternative – robots that move physical furniture so that a real chair or wall is waiting for you.

The technology called RoomShift starts like most VR setups. The user wears an Oculus Go headset and a tracking system that monitors a 10 x 10 meter room. But the real fun begins with a fleet of modified Roombas with makeshift scissor lifts attached. These robots can slide around under furniture, use the scissor lifts to lift it off the floor, move it to a new location, and then put it back down again.

This relatively simple idea has some pretty big implications for VR. You could actually sit in a chair or put items on a table. Instead of a virtual popup warning you not to go any further in that direction lest you break a window, a portable wall could shoot in front of your hand.

But perhaps one of the most ingenious tricks is how smaller pieces of furniture can be constantly moved around to trick users into believing that there is something bigger there. In one video, the team moves a small section of wall next to a user as they walk so that every time they reach out a hand, there is a surface that gives the distinct impression that it is a continuous wall. In another case, a larger table visible in virtual space is simulated by moving a small table. 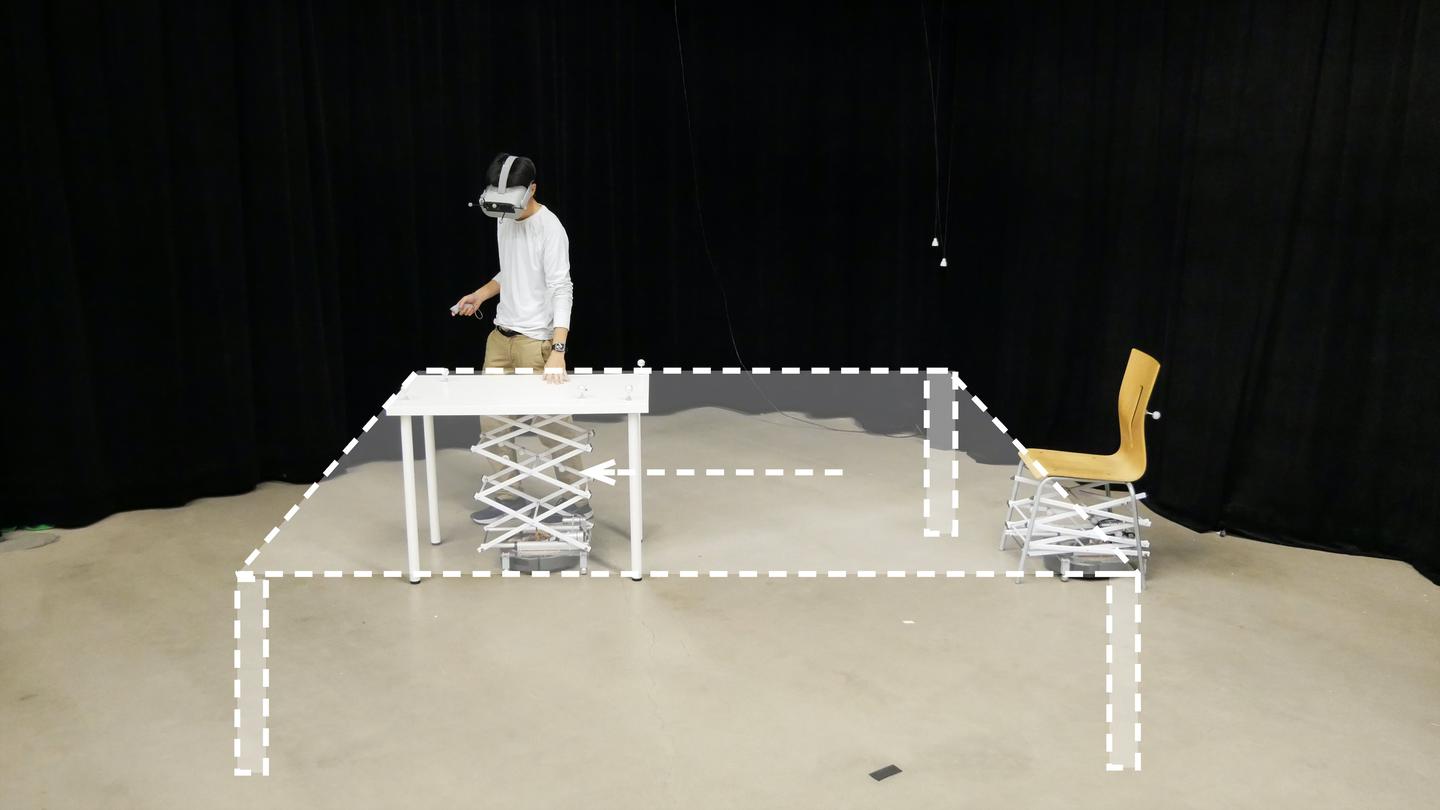 The RoomShift system can also handle a few different types of VR applications. Players can physically walk around the room on a room scale or, if they use the usual teleport method to move around, the robots can rearrange the room to suit the player’s new perspective. For example, teleport next to a chair and a Roomba will dutifully carry one to you.

The robots are programmed to avoid each other, the users, and the legs of objects under which they slide. They have been tested with objects up to 11.2 kg. However, the team says multiple bots could work together to lift heavier items. Furniture, Roombas and scissor lifts are tracked with reflective spheres.

Overall, it’s a very clever solution to a problem that already had some creative workarounds. Haptics are a common subject with rumbling engines, inflating bags, or packing pens in boots, gloves, jackets, or other devices that you can touch or carry.

RoomShift sounds a little too complicated for a VR setup at home, but it’s perfect for public entertainment venues like Zero Latency or AutronVR. At the moment, however, it remains in the area of ​​a proof-of-concept study.

The research was published in the proceedings of the 2020 CHI Conference on Human Factors in Computer Systems. The RoomShift system can be seen in action in the video below.

[CHI 2020] RoomShift: Dynamic haptics on a room scale for VR with swarm robots that move furniture

Moving Beyond the USPS in Last Mile EV Delivery

Couple says they were scammed by movers, has been living without furniture and…