Local leaders are now driving a conceptual airport transit hub, often referred to as “San Diego Grand Central Station,” through an expensive route of engineering reviews that could eventually result in taxpayers spending a billion dollars or more on its development.

On Wednesday, the San Diego Association of Governments released a Preparatory Notice (NOP) for the environmental review of a central mobility center – either on the Navy’s Old Town campus or at a location between Interstate 5 and the Pacific Highway near the northeastern edge of the airport. It would become the most important traffic center in the region and connect all train and bus routes to the airport with a people mover.

Filing is a formal act that alerts the public and various government agencies that SANDAG intends to prepare an Environmental Impact Report (EIR) through a government process under the California Environmental Quality Act. The public has until May 28 to contribute what the agency should examine in its report. Then SANDAG will work towards publishing a draft environmental analysis of various options in December 2022, said Keith Greer, who is responsible for environmental compliance.

For the leading transport authority in the region, the NOP is a small, albeit decisive, step with monumental implications. It is also the first major milestone in the region’s journey to reaching the airport with high-speed traffic since the SANDAG board agreed in 2019 to explore several options and routes in more depth, including a subway or high-speed van.

The big central vision is one with multiple moving targets – it starts with determining a location and identifying how travelers can be brought directly to the airport. In the environmental report, two location options as well as an extension of the tram to the airport as well as improvements to the local roads and the motorway connection are examined, the agency said.

However, SANDAG prefers to build its central mobility center on the Navy’s 70 acre Old Town Complex, or what is commonly referred to as NAVWAR. The proposed NAVWAR revitalization effort is a joint commitment between the Navy and SANDAG that was cemented in 2019 to redesign the military’s obsolete cybersecurity campus with the transit hub alongside brand new naval facilities, apartments, retail and private sector office space. 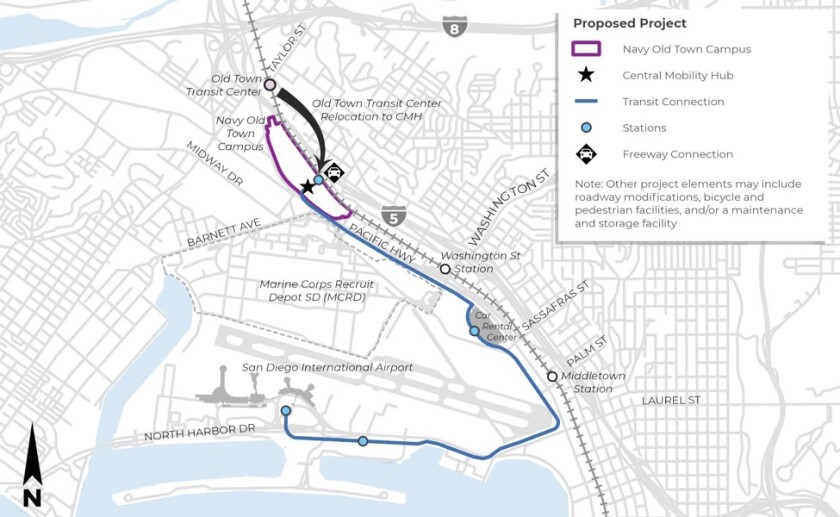 Although SANDAG is considering two other alternatives, the preferred project is a central mobility hub on the Navy’s 70 acre Old Town campus in the Midway District.

The Navy is currently working on its own state environmental assessment process under the National Environmental Policy Act to define the development parameters for the property in the Midway District. A draft version of the Navy’s document is overdue and is expected to be released later this spring.

The agencies are also negotiating a term sheet that sets out how the land will be transferred and developed. The high-profile idea stems from a deal between the Navy and the Manchester Financial Group in 2006 and could result in SANDAG building new offices for the Navy’s IT staff – on the NAVWAR property or elsewhere – in exchange for the majority of the property.

SANDAG’s work with the Navy on the Old Town property coincides with airport transit efforts that intensified several years ago when the San Diego Regional Airport Authority continued its $ 3 billion plan to redesign the airport, which mainly focused on the overhaul and expansion of the aging Terminal 1. The airport authority and its airline partners have already committed to spend 500 million US dollars on relevant transportation projects, including the construction of a transit station for Terminals 1 and 2.

SANDAG officials say no matter which transit option is ultimately chosen, it will be a huge improvement over what exists now, a bus route that takes about 10 to 15 minutes to travel between the downtown Santa Fe depot and the airport. According to SANDAG, 99 percent of trips to the airport are made with private vehicles.

Based on preliminary studies published by SANDAG in 2019, an underground non-stop people mover operated by NAVWAR promises reduced airport traffic – by up to 30 percent – and a high number of passengers that could reach 40,000 passengers a day.

“For me it’s like a relay race where we had the airport subcommittee (identify concepts) to improve airport connectivity,” said Greer. “What happens to (the NOP) is the start of the baton. We have advanced our comprehensive multimodal corridor planning and we are in the process of completing it and the baton is slowly being passed to the environmental and engineering process. “

While the SANDAG officials remain steadfast in their passion for a large central hub and direct transit to the airport, one major hurdle remains – the financing. The cost of completing the environmental assessment process is estimated at $ 70 million, with SANDAG expected to take the bill. However, the total cost of the project is estimated at $ 4 billion or more, of which $ 1 billion would need to be raised locally to mobilize additional state and federal dollars, Ikhrata said.

He previously said that he would like to go to the polls as early as 2022 to request a full cent increase in regional sales tax to fund a long-term regional transportation plan costing more than $ 170 billion – including the airport transit project – but he’s also in sight in 2024.

“As with many projects, there has to be local money on the table and we have no local funding other than $ 50 million (previously approved),” said Ikhrata. “For the rest, we have to turn to the voters … If we don’t start such a process, we will never do anything. That is absolutely expensive, but worth every penny. “

SANDAG is holding a public online scoping meeting for the central mobility center EIR on May 11th. More information is available on the project’s virtual engagement site.

Grab, the food-delivery giant backed by Softbank, is going public in the US via the largest-ever SPAC merger, valuing it at $40 billion

Texas Instruments (TXN) Crossed Above the 50-Day Moving Average: What That Means for…

Moving Is A Nightmare! 6 Tips To Ease Your Clients’ Headaches